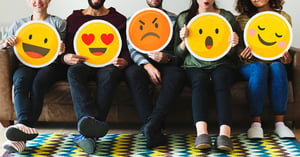 In a recent “Winging It” podcast, Steph Curry doubted that NASA ever landed on the moon. This comment made in passing spread quickly, and the country was shocked by Curry’s disbelief. NASA spokesman, Allard Beutel, responded in a statement to the Golden State Warriors All-Star saying, “There’s lots of evidence NASA landed 12 American astronauts on the Moon from 1969 – 1972. We’d love for Mr. Curry to tour the lunar lab at our Johnson Space Center in Houston, perhaps the next time the Warriors are in town to play the Rockets." Since then, Curry has made a response of his own to clarify his original statement. It turns out he was joking on the episode of “Winging It” and didn’t expect his comment to cause so much controversy, although, he now has every intention of following through on NASA’s offer for a tour of the Johnson Space Center.

While this may seem irrelevant for credit unions, there is something to gain from all of this. Perception is key when posting online, in a blog post, or on social media, so it’s important for credit unions to consider how members might interpret each message. Social media is a great resource for credit unions to connect with members and market products and services, but credit unions have to be careful about what is said on these platforms. Once something is put out on social media, it can never truly be deleted. Even a post that’s only up for 5 or 10 minutes will make impressions on members, and should your credit union misspeak or be misunderstood online, the first step is addressing the issue. While Steph Curry thought his comments about NASA would blow over if ignored, things only continued to escalate the longer he remained silent. It wasn’t until he addressed the situation with his own clarifying statement that the media moved on. This serves as a lesson to credit unions because even comments meant to be received in a light-hearted manner can be misinterpreted and spread quickly. Should a credit union find themselves in a situation like Steph’s, take action as soon as the backlash begins - taking hold of the conversation prevents it from spinning out of control.

However, credit unions shouldn’t let the fear of backlash from social media prevent them from posting on these platforms. Even the largest and most successful businesses (or basketball players) have had a social media mishap, and what separates the disasters from little bumps in the road is the way in which it is handled. Here are a few tips to help credit unions manage mishaps on social media:

Stay True to Your Brand. Your credit union has a mission and a set of core values, and that should come across in social media posts. When a member sends an angry tweet your way, respond in the same way that you would to an irate member in-branch. Staying true to your credit union’s brand and values helps build authenticity and credibility with members.

Listen. While it’s important to respond to issues as soon as possible, make sure your credit union is taking enough time to evaluate what the member has said and form an appropriate response. There are social listening tools credit unions can use to make sure they are always tuned in to what members are saying. Over time many brands have been able to improve their sentiment by listening on social media and adjusting strategies to better communicate with members.

Plan Before You Post. Credit unions who have yet to implement social media might be eager to start, but don’t jump the gun. Creating a social media strategy and drafting a calendar of posts can certainly help prevent some mishaps from happening. Not only will a calendar make social posting more consistent and effective but it also allows credit unions to ensure content is projecting the intended message.

Information travels fast, and even NBA All-Star Steph Curry isn’t safe from speculation and backlash on the internet. Credit unions should expect some negative conversation to arise on social media, and when it does, being prepared to respond to the situation will allow credit unions to bounce back much more quickly. The lucky credit unions might even end up with a tour of the Johnson Space Center to brag about afterward.