How To Attract Chicks Like Dowding; Attracting and Keeping a Motivated Workforce 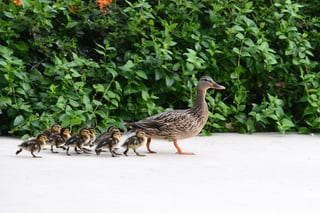 Air Chief Marshal Sir Hugh Dowding is considered one of the heroes of the Battle of Britain, which took place in August/September of 1940. He was known to be stubborn and shy with not much of a sense of humor. However, he and his band of fighter pilots, whom he affectionately referred to as his ''chicks'', because of their young age, were the heroes of this battle, saving Britain from the invading German army. He is widely viewed as having won this battle by thorough preparation and keen strategizing. His preparation included phone lines buried in cement to ensure un-disrupted communication, an underground concrete operations room, and when battle came, disguising his squadron's smaller size by sending them out in small increments so the enemy would underestimate their forces. His squadron of fighter pilots were loyal, no doubt because of the care he took to see after their welfare and prepared them well prior to battle. Dowding came to be known by his 'chicks' pilots as someone who cared for his men and had their best interests at heart. In a way, Dowding laid the groundwork for one aspect of The Credit Union Difference.
His example of preparedness is often referenced as an example of how to succeed even when the odds might be against you. As Benjamin Franklin once said, "By failing to prepare, you are preparing to fail."  What should not be overlooked, however, is the care Dowding took when preparing and looking after his men. He inspired their loyalty, motivated them, and in return they did their best and gave him their trust.
By failing to prepare, you are preparing to fail.
Read more at: https://www.brainyquote.com/quotes/benjamin_franklin_13
What led to Dowding's success with his men and what can we learn from Dowding to help inspire our own employed "chicks"?
Attract
Dowding's squadron of 'chicks' came to be under his command during war-time obligations, and most likely those pilots didn't have much choice in whom they served under. However, they possessed a certain passion and had capabilities and skills that led them to be placed there, and ultimately contributed to winning a major battle in the war.  When it comes to establishing your own squadron of credit union employees, you will certainly have more control in the selection process but how do you attract the right employee?  As you interview, you will find many potential candidates that meet the qualifications for your position, but are they truly a good fit?  Will this be the beginning of a long career with your credit union, or merely a stepping stone to other opportunities? The answer might lie in asking the right questions and listening to the answers. What courses did they excel in while at school? Where else have they worked and did they enjoy it? You want to ensure you hire someone who is not only competent and able to do their job but is also energized by it because they honestly like it. More ideal candidates will respond to your job opportunity because they desire a career in the credit union industry and possibly even with your specific credit union, and not just because they need money.
Motivate
Dowding's success can be attributed to a number of things. Notably, he devised a system that used technology, intelligence, decision-making, and his pilots, incorporating the capabilities of the time in order to have the best understanding possible of the battle as it unfolded. He was in constant communication and went to great lengths to ensure he had the best intel before sending his pilots out. He motivated his "chicks" by setting an example, and was ambitious in setting goals and then provided the tools to accomplish them. The same can be said and applied to your credit union. Provide your employees with a clear path to success, set realistic goals, meet regularly and invite feedback. Listen to your employees and hear them out. Take time to evaluate what isn't working and leave what is - or even build on it. The beauty of a credit union is that everyone literally has a vested interest in its success.
Trust
While Dowding was rather straight-forward and not known to laugh much, he was also known for his humility and sincerity. He always had his pilot's best interests at heart, often referring to his "dear fighter boys" as his "chicks"; his son Derek was actually one of them, possibly inspiring the endearment. He trusted them to do their best, and he gained their trust through his dedication and thorough preparation before sending them out on a mission. A trustworthy relationship will inspire loyalty, and you will see this trust go both ways. An employee should feel capable of coming forward when an opportunity presents itself and not be worried about backlash or possible repercussions. Establish an open relationship by inviting feedback, maybe a monthly forum or meeting and be willing to incorporate your employee's ideas. Weed out the bad apples when you come across them and identify those that are sabotaging your healthy work environment. In exchange, provide honest feedback of your own and be fair, and recognize when someone has gone above and beyond. You will be rewarded with an inspired, motivated and invested employee, which is another example of what makes The Credit Union Difference.