Will Zelle Win the Hearts of Credit Unions? 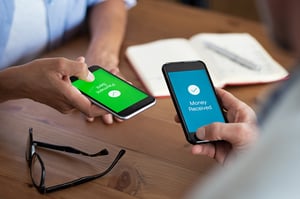 For the past several years, the financial industry has claimed the P2P market was finally going to take off. While P2P payments have certainly continued to grow in popularity, they have not reached the heights that FIs anticipated. However, in the past year, P2P platforms have experienced immense growth, especially among big banks. Zelle launched back in September of 2017 and in 2018 they have made tremendous strides with larger FIs. Zelle is already working with 51 big banks and 200 more are under contract to launch in the coming months. However, with larger FIs under their belt, Zelle is also looking to win the hearts small and mid-sized credit unions.

Zelle has proven to be well-received and has high usage rates in multiple age groups. Competing apps like Venmo are most popular among the Millennial cohort. Zelle has been able to penetrate the market more broadly due to integrations with already existing mobile banking apps. Venmo is still the reigning P2P platform but that’s expected to change in the coming year. Zelle is on track to be the leading P2P application, moving $75 billion last year, and an estimated 100,000 users join each day. With growth like that, it’s no surprise that FIs expect big things from Zelle. Not to mention Zelle’s Q3 2018 P2P volume was $32 billion, while Venmo and PayPal reported $36 billion in total payments volume.

Now that Zelle is in with the big dogs, they are retargeting their marketing efforts to a new group: credit unions. Many credit unions were skeptical of Zelle upon launch because they were unsure of its capability to integrate with their current digital banking services. Others feared that Zelle would actually diminish profits and put money back into the pockets of big banks. After all, Zelle was created by some of the largest financial institutions like Bank of America, Wells Fargo, and JPMorgan Chase. However, one of the first credit unions to adopt Zelle has seen impressive results. According to First Tech Federal Credit Union, Zelle was helpful in implementing the platform and even provided assistance in creating a marketing campaign for the new P2P payment service. Although First Tech Federal Credit Union is not a small institution (they have more than 40 branches in 8 different states), their success with Zelle has encouraged smaller credit unions and FIs to consider the platform.

Both members and FIs were initially skeptical of P2P payments but these platforms have become irreplaceable in the eyes of many. The convenience of exchanging money between friends has made splitting the check or paying for parking a lot easier, and less awkward. While there are several options to choose from in terms of P2P payments, Zelle has been able to make such an impact due to the experience it provides. Platforms like PayPal’s Venmo are wildly popular among members because they are easy to set up, user-friendly, and of course convenient. Zelle provides the same member experience through real-time payments but it also integrates with credit unions current technology, which is why banks and credit unions alike have been so enticed by it.