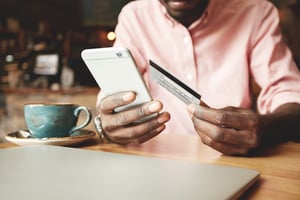 In a bid to further their already extensive reach to young users, Venmo announced last week that they will be offering a debit card to their users. PayPal-owned Venmo is one of the most popular peer-to-peer payment service apps, and as the P2P market heats up, this is clearly an effort to take the lead that others will likely follow. Feeling pressure from Zelle, a network comprised of a consortium of some of the largest banks in the United States, who launched an app allowing their customers to send money to each other instantly via smartphones last year. Venmo is taking advantage of their speed to market to gain more users, but what does this mean to your credit union?

For starters, this is yet another reason why these services should not be ignored or mistaken for a fad. According to news of the release on Reuters, Venmo processed $12 billion in payments in Q1 2018, and more than $25 billion moved through Zelle’s network in that same period. Clearly financial institutions are seeing this market as both an opportunity and a viable threat if they don't jump in on the game.

Money is easily exchanged with these apps, fitting nicely into the lifestyles of the Millennials and Gen Z-ers. On a typical night out, money can be exchanged instantly through their mobile phones to split the cost of the concert tickets, an Uber ride to the show, rounds of drinks at the bar, and no longer requires the server to split restaurant tabs. At the end of the evening, a significant balance can be accumulated in the app, especially on a good night!

Transferring those funds to their checking account the next day, when they are rehashing the night before over a large soy latte is simple, but the funds are not instantly available to pay for the avocado toast they just ordered. The release of the debit card will give Venmo users the ability to pay in stores and restaurants using the balance on their Venmo app, rather than having to wait for the funds to be available in their checking account. Venmo’s debit card, now in limited release, will be issued by Bancorp Bank and will allow up to $400 in daily withdrawals.

Venmo's movement beyond P2P isn't new. In October of last year, the San Jose, California based company rolled out the ability for Venmo users to pay using their app at more than two million online retail sites. As their movement into more financial transactions increases, credit unions need to be aware that little by little they can start to erode from your member base. The generations using P2P payment providers are eager to simplify their life. With a trendy app they can pay for their fantasy football entrance fee and split the dinner bill, which will eventually allow them to replace more traditional banking services, so credit unions need to prepare a response.