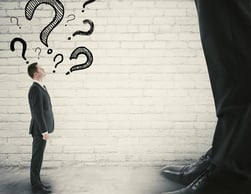 Many Small credit unions are fighting an uphill battle to compete in the financial marketplace and to gain a better foothold. With recent numbers illustrating their decline in membership, assets and loan growth, it seems small credit unions have a blurry future. However, with an estimated 70% (4000/5684) of total operational credit unions classified as small (having under $100M in assets,) they represent a huge portion of the industry, and their struggles shouldn’t be easily dismissed.

The chart below from the NCUA Annual Report illustrates the decline credit unions by assets class between the years of 2010-2017. 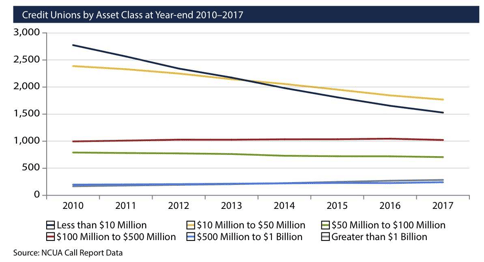 The credit union industry as a whole saw overall growth in assets and membership in the last few years, but this growth was mostly limited to the larger credit unions. Smaller ones witnessed a trend of having decreased membership and assets. In many communities, these small credit unions are a life force. Often times they are based in small towns, provide affordable financial services and have strong ties with the community.
Smaller credit unions can survive - and thrive, but to do so they need to be resourceful, efficient and be on the lookout for process improvements. Here are five common things smaller credit unions typically struggle with in comparison to their larger counterparts.
1. Technology: Some credit unions lack the ability to offer the latest and greatest technology to their members. They either don't have the R&D department in-house or can't afford the cost of integrating third parties with their core system. However, choosing a core technology system with open architecture which allows for third-party integration can help to stay competitive while reducing cost. It can also provide credit union efficiencies like automated loan approvals, streamlined instant issue for cards and robust compliance tools.
2. Skilled Employees: Having a smaller staff goes hand in hand with a smaller credit union. The volume of work is there but the budget likely won't justify the hiring of additional employees. This means that much is required of the employees you do have but it also means they need to maximize the use of their time. Technology can be one of the best ways to automate processes and become more efficient. Take the time to learn what your current technology is capable of. Many times you will be surprised at how many features exist that are not being utilized.
3. Economies of Scale - doing more with less: As with just about any economic scenario, the more product that is purchased, or produced, the cheaper the ultimate cost. There are certain efficiencies generated when working with larger numbers or quantities. When a credit union successfully reduces cost and increases production, such as faster loan processing and application decisioning, an internal economy of scale has been reached. An efficiency has been generated, resulting in increased profitability and time-saving. This is a challenge for small credit unions who are at a disadvantage due to their lack of resources. However, as mentioned earlier, some of these efficiencies can be realized through automation.

4. Adhering to Regulatory Standards: A requirement for all credit unions is to maintain certain regulatory requirements, which includes monitoring transactions, risk levels and member due diligence. While some of the larger credit unions have a compliance officer, and even possibly a compliance department, that is not usually possible for a smaller entity. To remain compliant, many smaller credit unions are turning to an automated service, such as SimpliRisk, which is a compliance solution that can automatically track and monitor risk for each member.
5. Marketing: Most smaller credit unions having limited working capital, and by default marketing and new membership development have to take a backseat. However, there are many free services that can propel your marketing forward. For example, Mailchimp provides free email services for 2,000 subscribers and 12,000 emails per month, pexels.com provides free stock photos and pixlr.com provides a free and robust photo editing platform. Leveraging some free and open source services will allow for some funds to be directed towards generating new business, new members and growth in assets and membership.
Read on to learn about the success story of Tri-Town Teachers FCU, who utilized efficiencies to help their small credit union thrive.