The Perils of CU Leaders Helicopter Parenting Their Members & Staff 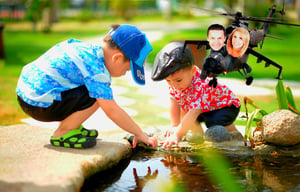 There is a constant flow of outlandish stories pouring out of American universities. Kids who can't figure out how to cook an egg, sew a button, or "adult" in any way. Parents who are calling college professors defending their kid's sub-par mid-term efforts because the kid called them crying. These "helicopter parents" have tried so hard to protect their children from the big, bad modern world, that they've handicapped their growth and independent success to an embarrassing level. Are Credit Union leaders doing the same thing to their members?

It is in the nature of credit union leaders to be protective of their membership. Credit unions are notoriously dedicated to the satisfaction of their members because they are generally members themselves. They fear taking big risks which might jeopardize the savings and investments of the individuals who share in the CU, and as a result, they may settle with the status quo and become followers rather than leaders. This is especially true when it comes to updating technology. Break the chains of fear by recognizing the benefits of modern fintech innovations, giving your members and your credit union the chance to be a strong, independent organization with great growth potential.

1. Give staff tools to succeed. Legacy technology can be a bear to operate. A steep learning curve can be a hindrance to training. In positions with a high turnover rate (MSRs), a slow down in the learning process can have a big impact on your member experience. Modern core platforms should have an intuitive user interface (UI), meaning new MSRs can pick it up quickly. Ron Wood, CEO of Kings Peak Credit Union out of Utah, recently discussed this easily surmountable challenge:  “We recently hired a new MSR and were able to train in very little time. The MSR picked up the technology quickly and ran with it saying, 'this makes sense'. On our previous core system, we had new MSRs shadow another employee anywhere from 3-5 days before we gave them their own drawer. This new employee took his drawer the first day.”

2. Don't underestimate your staff's ability to adapt. It may be painful to think about learning a new system or introducing new technology, but just as technology has evolved in its capabilities, developers have also put greater effort into the user experience (UX). Stressing the efficiencies the new system creates will aid in employee adoption. For example, with services like check 21 teller capture at each workstation, Kings Peak CU cut 10 minutes off their closing procedures and employees got out the door quicker at the end of the day.

3. Help them be accountable. Accountability is something that some of today's youth struggle with, as their helicopter parents would never allow them to account for their own actions. It's estimated that credit union CTOs and CIOs often spend 85-90% of their time on basic blocking and tackling and are generally just trying to keep the lights on. Ask your IT department what needs to be done to make your technology work on its own, so they can spend time on enhancing member facing technologies. And in turn, hold members accountable for using the technology you have spent time and money on improving by phasing out legacy and costly tech.

4. Give them the freedom to choose. Helicopter parents make most of the decisions for their kids, thinking they know best. For CUs, give your members easy visibility into what their loan and investment options are. Provide modern and creative financing alternatives that are now available thanks to emerging digital technology. Creative credit union lending functions can be delivered and managed from within your credit union core system, including teaser rates, skip-a-pays, variable rates/terms, mortgage servicing, mobile lending, indirect lending, loan decisioning and loan modifications. Don't assume all of your members want the same thing. Credit union lending best practices suggest you offer the options that today's technologies provide. Kings Peak Credit Union grew their loan portfolio by 57% in one year after implementing a new core that allowed for this increased flexibility in lending.