Philanthropy's Role in the Credit Union 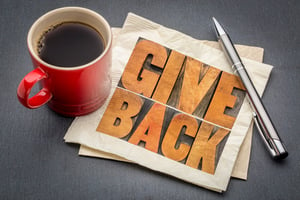 Credit unions have an important role in the community in which they reside, and their identity is often associated with a certain organization, entity or field of employment that has a recognizable presence. Organizations such as the city’s fire fighters or police department, an educators’ credit union or a trade credit union that represents one of the city’s largest employers, like the local steel workers. Sometimes the city itself has its own credit union open to its residents. Along with proudly displaying the name of these organizations on their brick exterior comes an equally visible presence and responsibility to support that community. It goes even beyond the Credit Union Difference, which places importance on personalized member service; a great credit union also has its ear to the ground in order to support the community as a whole through philanthropy and community service.

Philanthropy and volunteering can take on many forms and is not just needed during times of crisis, though there is no question that’s often when the need is greatest. The Credit Union Journal recently highlighted some of the wonderful ways credit unions are giving back. A Florida based credit union’s donation helped with programs and services for Tampa Bay's Boys’ and Girls’ Club; similarly, a credit union’s donation in Massachusetts helped provide much needed school supplies through the Boys and Girls Club.

Contributing to education and academic programs is always important in helping to prepare today’s youth for future success. Providing them with the tools they need to succeed and watching them grow is rewarding and can become the base of life-long relationships. In Michigan, one CU was able to raise $45,000 in scholarship money, some of which will help recipients attend trade and technical skill schools. In Chicago recently, FLEX user (pictured right) Chicago Post Office Employees CU donated 100 backpacks filled with school supplies to the Volunteers of America.

In times of crisis like a natural disaster, credit unions can be the lifeline to safety and survival – both physically and financially. They often provide financial assistance in the form of emergency loans to victims to help them survive while they recover and rebuild. In Hawaii in 2018, in a city overcome by rain and flooding, a credit union mobilized its employees and delivered filled gas cans and other supplies in personal trucks. They used “dry bags” filled with electronic devices and forms in order to offer financial assistance, and using boats and jet skis when they needed to, hiked to where people needed assistance in areas cut off by the flood.

Examples abound where credit unions have stepped up for their communities. And in doing so, they have endeared themselves to the cities and towns in which they reside and service. Members may join initially because of an affiliation, but stay because of the way they are treated. Successful and growing credit unions realize their footprint in the community is so much more than just the physical structure their credit union occupies. They know in giving back, you get so much more in return. Philanthropy and a strong relationship with the community is just one attribute that sets credit unions apart from other financial institutions – and demonstrates The Credit Union Difference.