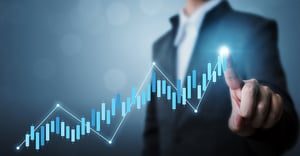 Iowa: Meanwhile, the state with the highest overall loan-to-share ratio is Iowa at 99.4%. Although the American economy is fairing well, a loan-to-share ratio approaching 100% is quite risky. A ratio that high indicates that loan growth is far ahead of deposit growth, so it’s likely that Iowa credit unions will start to cut back on lending, or seek additional deposits to increase their liquidity.

So what do all these numbers mean for the credit union industry on the whole?

Loan growth is at an all-time high.

With increasing loan-to-share ratios comes loan growth. The credit union industry’s portfolio has passed $1 trillion (yes TRILLION) for the first time ever. While auto loans have been on the decline throughout 2018, first time mortgages and credit cards are gaining momentum, which have certainly contributed to the industry’s record-breaking portfolio.

In times of economic prosperity, people are more likely to take out loans. While this holds true in the current climate, credit unions are tightly managing their liquidity as loan volumes increase. To counteract the deficit in loans vs. deposits, credit unions are turning to share certificates and high-yield money markets to balance increasing loan volumes.

Membership across the credit union industry has grown 4.4% this year, which equates to 115.5 million members as of the end of Q2. Not only are credit unions seeing an increase in members, but an increase in usage as well. Members are investing more money with credit unions, and their account balances are rising. As 2019 is quickly approaching, it’s likely we’ll see member volume and engagement continue to rise.

As the U.S economy continues to grow, so will loan-to-share ratios. While this is beneficial to the financial industry, credit unions must also consider how they can manage their liquidity as loan growth continues. In some cases credit unions may enact tighter lending policies and others may seek additional instruments to help balance deposits and loans better. These strategies will not only be influenced by national performance but on state and regional levels as well. Come 2019, it will be interesting to see which states have taken steps to limit lending as others continue to fuel loan growth.