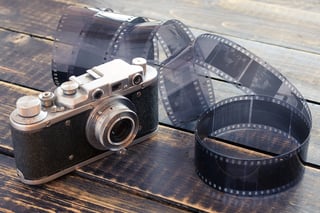 From the 70's through the 90's, Kodak was everywhere. It was a term everyone recognized, so much so that to take a 'Kodak' came to mean the same as taking a 'picture'. An especially touching situation was called a 'Kodak Moment,' and there were even Kodak Picture Spots in Disney World. Everyone was capturing their life moments in sharp, photographic imagery and eagerly opening their film envelopes once they were processed to see how they came out. People created scrapbooks and dutifully filed away their negatives. The demand for film processing became so great that Kodak took to building little photo "huts" or kiosks in parking lots where customers could drop off their pictures for development 24 hours a day.
Kodak was everywhere it seemed, and on top of its game. At its peak, Kodak had captured 90% of the film market and was enormously successful. It was an integral part of our life - an example of successful marketing at its finest. How could they fail? They provided people with tangible copies of their memories and happiest moments that would last a lifetime.
Despite all of Kodak's early success, in 2012 it filed for bankruptcy. The reason was simple: the unwillingness to adapt. It doesn't take hindsight to see Kodak was late to the digital photography game. But it didn't have to happen that way. The story is now a legend, but is certainly no myth. A Kodak employee invented the first digital camera in 1975, but the reaction by executives was their eventual downfall, essentially shoving the technology in a closet convinced nobody would ever want to look at their pictures on a screen. Kodak failed to recognize the opportunity to be a true innovative leader, and in fact was reluctant for a very long time to adapt to the new technology even when it was becoming more mainstream.  When Kodak finally did, it was too late, introducing their digital cameras well after other companies had already done so. They tried to compete, but could never quite catch up, and ultimately lost their top ranking in the marketplace.
In an industry where it was once the leader, Kodak was the author of its own demise, refusing initially to recognize the changing industry trends and the consumers' changing needs - new digital photography innovations - and instead stayed focused on what had initially made them successful - film photography. This resistance to change, along with their rooted belief in old marketing ways and products cost them their lead in the industry, and eventually the company. What Kodak failed to do was listen to their customers, and refused to embrace modern technology in order to stay relevant.
This cautionary tale can be applied to just about any industry. The desire to stay relevant and recognizing the latest and greatest developments in technology is crucial to remaining successful and competitive.  A credit union must identify what its members want, and better yet, anticipate what's next on the horizon. These days it might be voice recognition software, the ability for your devices to interact (IoT), or the ability for a car to park itself. In the credit union and financial industry it might be enhanced biometrics for security, improved mobile app capabilities, and the ability to accomplish just about anything independent of a branch visit.
Beyond that, and perhaps most importantly, once you've identified the market's newest demands, there has to be a willingness to embrace these changes. Hand in hand with recognizing the most in-demand fintech, a credit union needs to be able to incorporate these tech trends swiftly with their core system software. Set yourself up for success by investing in strong and adaptable core technology with open architecture that can easily integrate the latest tech when it comes along. Be sure to partner with a provider that prides itself in staying current and on top of the latest industry trends. Do your research and choose a core provider that shares your same goals and can meet the demands of the ever-changing industry.