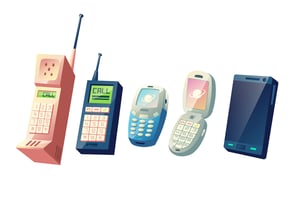 Technology Evolution is a theory that looks at the radical transformation of society due to technological developments, and is broken into 3 stages: It began with humans' use of tools, slowly evolving to their use of machines, and then rapidly progressing to automation and Artificial Intelligence. The evolution of the mobile banking app has undergone a similar, albeit on a much less grand scale, transformation. What started as a tool for early adopters to check balances and perhaps transfer funds from their cellular devices, mobile banking apps in their infancy still required members to perform the majority of their banking functions either online or in-branch. As the technology advanced, more and more features became available to members, where the app was put to work to perform banking tasks members used to have to do on a more manual basis. In the past couple of years, however, mobile apps have rapidly evolved to automate many parts of the banking experience for members. Integration of product features and a better user experience have become the expectation, not the exception, for members using your credit union's app.

The concept of integration, early on, meant simply your mobile banking app would integrate with your credit union core. But now, due to mobile banking's own technology evolution, integration itself has evolved to mean much more. How does your mobile banking app integrate with your member's life? What level of security are you offering when they log into your app? When introduced in 2009, the first mobile banking app had less than six or seven total features and a typical login consisted of simply entering a username and password. Most mobile banking apps today do as much, if not more, than what your internet banking portal can provide. They may allow certain features "in-line" accessible from any screen, use tiles to represent features and allow for grouping menu items using graphics all to assist the member when navigating the app.

87 percent of financial institutions within the asset range of $50 million to $15 billion have launched a mobile banking application, according to a July 2019 report. This trend is only going to continue: By 2021, 3 billion people worldwide are expected to bank via digital platforms. With that increasing number stronger levels of security such as two-factor authentication, biometrics and adaptive authentication are gaining ground and becoming the expectation of mobile app users.

On the horizon are even more advanced features currently being tested, such as voice-activated commands for banking functions within your app, seamless integration of your credit union's mobile app with other vendor apps so members can see their entire financial well being, and continuing improvements of P2P payments technology along with better security options as well. All of these features are driven by the demand of members to make their lives easier. It is no longer enough to simply have a mobile app that is integrated with your credit union core... Members expect your mobile app to be integrated with them.