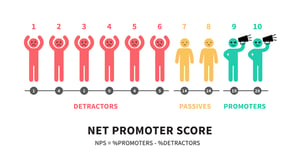 AT&T's new commercial series is a humorous take on the saying "Just OK is not OK." From the boy bands that don't dance declared as "Just OK," to the tattoo artist who eases the nerve of his client by assuring him he will deliver an "OK tattoo."  Every credit union wants to know how they’re doing and looks for ways to measure their success, and just OK is not OK. Are their members happy? Are they satisfied? Would they refer others to come in and bank there? They'd also like to know if there are services that are missing that a member would like to have, and what can be done to provide the ultimate experience. The Net Promoter Score (NPS) is one way to get an idea of how your credit union ranks with your members. It is a scoring system that takes members' responses and organizes them into 3 scoring ranges and provides a snapshot of where most of your members rank your credit union.

According to livecusurvey.com, Net Promoter Scores are a standardized metric that measures customer satisfaction in countless industries. The basic question is this: on a scale from 1 to 10, how likely are you to recommend a brand’s products or services to a friend or colleague? Would you promote this brand or company?

For Credit Unions, based on the score members give, they’re considered Promoters, Passives, or Detractors.


Promoters are considered likely to exhibit value-creating behaviors, such as relying on you for all their banking needs, remaining members for longer, and making more positive referrals to other potential members. Detractors, on the contrary, are believed to be less likely to exhibit the value-creating behaviors above, so while they may still bank with your CU, are more than likely to think and speak negatively about you, and are not likely to boost your brand amongst their peer groups. Responses of 7 and 8 are labeled Passives, and their behavior falls between Promoters and Detractors... they are just OK.

Once you have the results, the idea is to take it a step or two further. Ask members for feedback or distribute member surveys. Evaluate their feedback and incorporate changes based on what they say. Periodically reissue those surveyed and see if their feedback has improved.

Credit unions can also occasionally rerun the Net Promoter Score. Ideally, over time, this score should improve as long as feedback is provided and changes are made. Keep in mind, as you seek to compare your performance with peers in the industry, the average score for financial institutions is around 45. Credit unions in particular have scores that run between 30 and the high 60s.

Credit unions are known for their member services and the Credit Union Difference. This should be a focus from the very beginning and evident in your member onboarding. The first impression a member has of your CU is long lasting, and can lead to a greater NPS over time. This is one tool that can assist in staying on top of their members satisfaction, and strive to be better than Just OK.