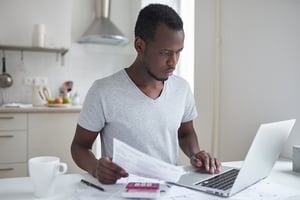 Credit unions are often concerned that automated decisioning will negatively affect their asset quality, but studies have shown that there are two sides to that story. The median consumer loan delinquency rate for automated decisioning is 0.77%, and while this is actually 12 basis points higher than those who do not use it, a closer look at the data shows that the automation provides a better overall outcome. The middle 50% of CUs who use auto-decisioning have more concentrated levels of delinquency at lower values. Similarly, the median net charge-off is 16 basis points higher than those who use a manual decisioning processes. But yet again the middle 50% of net charge-offs is more concentrated than those who do not use auto-decisioning. Therefore, credit unions might experience higher delinquency and charge-off rates with the automated option, but they will be concentrated at lower levels when compared with conventional decisioning strategies.